The Christian faith within Britain has undergone turmoil and changes throughout the centuries. The practice of Christianity has altered in style and grandeur depending on the predominant denomination at the time. From medieval worship, through Roman Catholic eras, and during the history of the Church of England, substantial changes in worship have been made. The use of silver within the church however, has remained constant.

The History of Christian Silver

During the Medieval period, Roman Catholicism prevailed. This style of worship consisted of lavish decoration and an abundance of grand ceremonies. In the Roman Catholic tradition, a devotion to God was to be shown via wealth and splendour; their churches would be places of wondrous excess, art and riches. Naturally, the impressive ceremonies necessitated silver and gold items.

Medieval churches would have contained highly ornamented silver items, often featuring brightly coloured enamel. Their rituals called for decorated vessels and vestments, and imagery depicting religious scenes and icons (such as crosses) would cover the churches. At this point in history, few regular church goers could actually read so their understanding would have depended largely on images and objects found around the church. Wealthy churches would contain many vessels, such as chalices, crafted in silver. Churches with less income however would have to rely on materials such as copper, brass and pewter.

Sadly, few Christian silver items from this period actually survived, due to most being melted down during the reformation…

The reformation period of Christianity was initiated in the 1530s when Henry VIII was excommunicated and ties were cut with the pope and therefore with Roman Catholicism. This split led to the formation of the Church of England and the consequent changes in religious practice. A more subdued form of worship now reigned, in which modesty and simplicity was championed- this of course was reflected in the silverware. 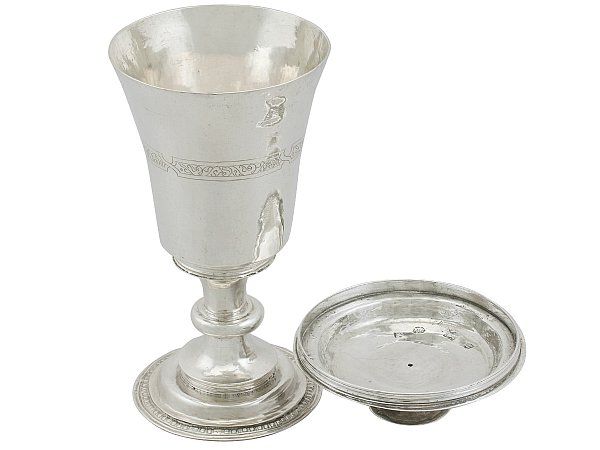 During the 1550s, the Crown Commissioners had confiscated or destroyed most silver items. This happened under the premise of ‘iconoclasm’ (meaning the social belief in the destruction of all religious icons and items featuring religious images). Simpler silver items now came into play. Communion cups for example became more common. This was due to one of the key reformations under the Church of England: expelling the belief ‘transubstantiation’ (which meant the belief that the bread and wine consumed at communion would literally transform into the flesh and blood of Christ within the body). Upon the removal of this belief, communion became symbolic, and was therefore participated in by more ordinary churchgoers- this led to the need for more silver communion cups.

Of course the transition away from Roman Catholicism wasn’t all smooth- a movement towards ‘counter reformation’ was established during the 16th Century. The main intent of the Counter Reformation was to reinstate the Eucharist. A renaissance of Roman Catholicism throughout the 17th Century led to churches being built in the grand and regal Baroque style. The silver items used within these churches were crafted to compliment this trend. Items such as monstrances, candelabras, sanctuary lamps and censers could now often be found in churches- they were all highly ornamental pieces that would draw worshippers’ eyes to the altar and the Eucharist.

Fast forward to the Victorian era and we see yet another stylistic transformation that directly affects the nature of churches- the Gothic era. The Gothic style resurrected some of the features of the medieval church and was promoted as the ‘true Christian style’. Many pre-reformation features of Christianity were reinstated at this stage and this lead to the revival of certain ornate silver items. The ciborium (a cup with an arched cover used to hold the Eucharist) for example, was brought into the Anglican Church.

With the dawn of the Arts and Crafts era in the 20th century there was yet another shift in the style of silver to be found in churches. This design style revolved around simple designs from small workshops and a conscious step away from commercial manufacturers. Simple silver communion cups and christening mugs thrived in this period.

Despite the fact that silver is used less regularly today on a day-to-day basis, it remains an integral part of religious ceremonies. Silver chalices/ communion cups are still an important part of the ritual of communion, and silver is often opted for to mark important events/anniversaries/new beginnings. A prime example of this is the practice- still popular today- of gifting a silver christening mug to welcome a new child into the family and the church. Even though our society is growing gradually more secular, there is still a great interest in the ceremonial aspects of religion as well as its rich history. Because of this, Christian silver still remains highly popular: either to be used within the church or gifted to a loved one.

As can be expected, there are certain symbols that can be seen repeated on various items of Christian Silver. The cross (or Christ on the cross) is the obvious one of course, often featured on communion chalices to indicate their purpose and associations. Other examples include doves, fish, and inscriptions featuring passages from the bible. Metalwork and detailed ornamentation would be used to depict these important symbols of Christianity.

An example of Christian inscription within our inventory can be found on this Victorian sterling silver paten (a silver plate used for holding the bread during the Eucharist). The paten is inscribed with the symbol IHS, which comes from the first three letters of the Latinised version ‘IHSOUS’ of the Greek spelling ‘ΙΗΣΟΥΣ’, which translates as the Holy Name of Jesus. 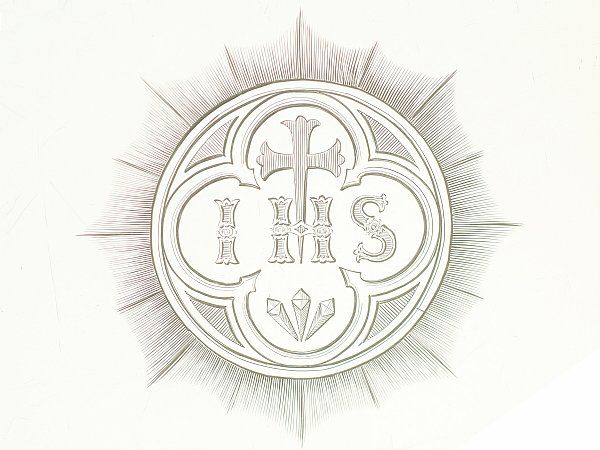 In addition, the simple image of a cross stands strongly in the only ornamented cartouche of our Georgian antique silver gilt chalice (1771). Crafted during the baroque era at a time of Counter Reformation and a renaissance of highly ornamented Christian silver; this chalice is a fine example of the combination of the utilitarian and decorative aspects of Christian silver. 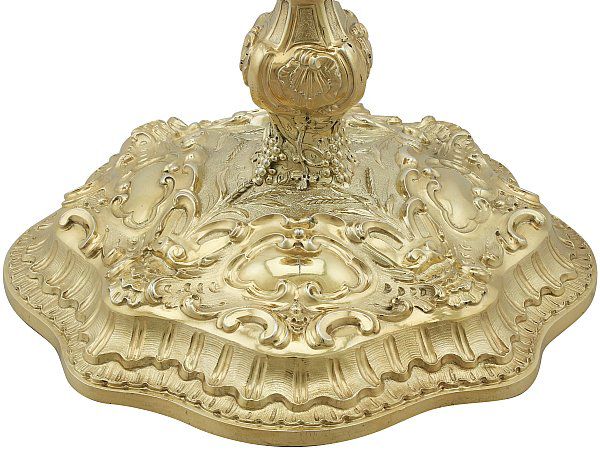 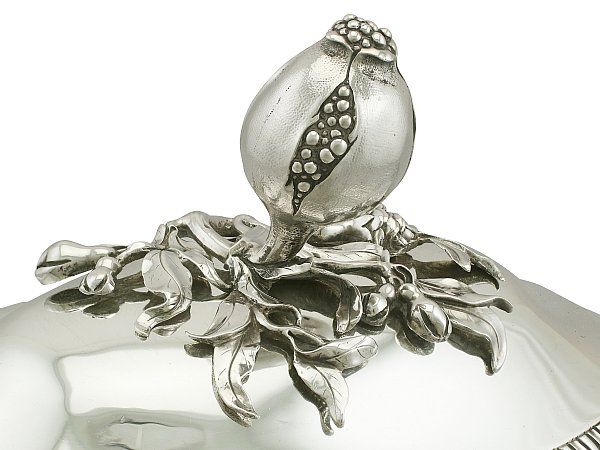 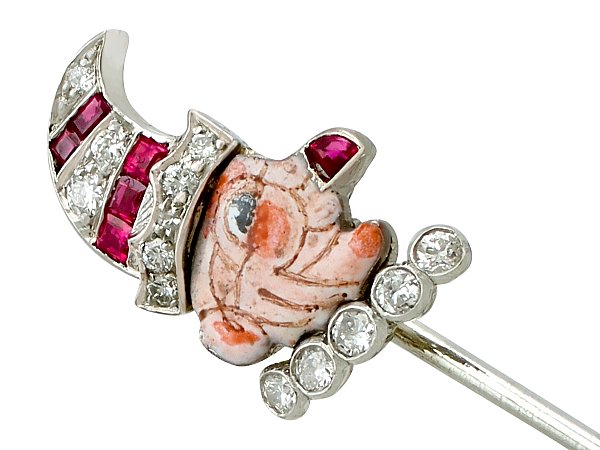