A typical bracelet length is 7.5″, however wrist sizes can vary quite drastically, therefore this is only an advisory length. In order for the bracelet to fit comfortably, it should accommodate itself to the oval shape of the wrist. Ideally, a bracelet shouldn’t fall too far down the hand, nor should it be able to move a significant distance up the arm. Some movement is preferable, however, in order to eliminate the feeling of having something clamped tight to the wrist. 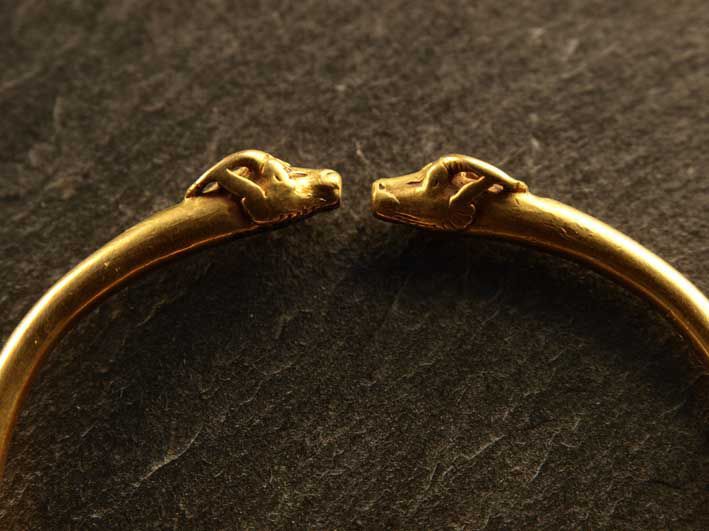 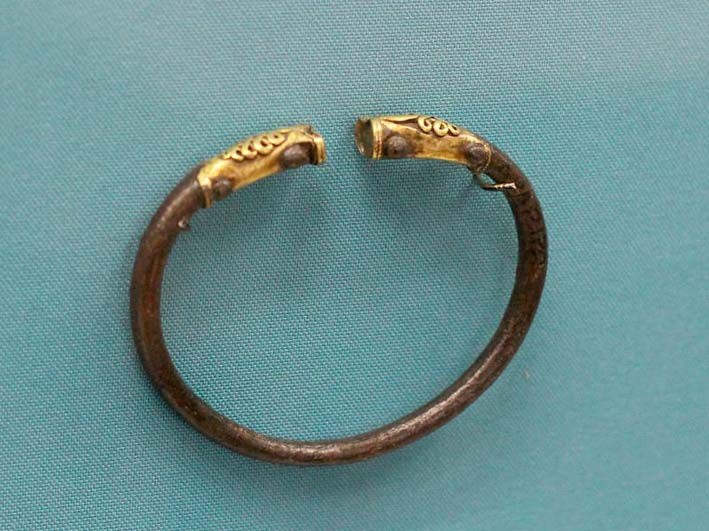 Image by torange.biz under license CC-BY 4.0 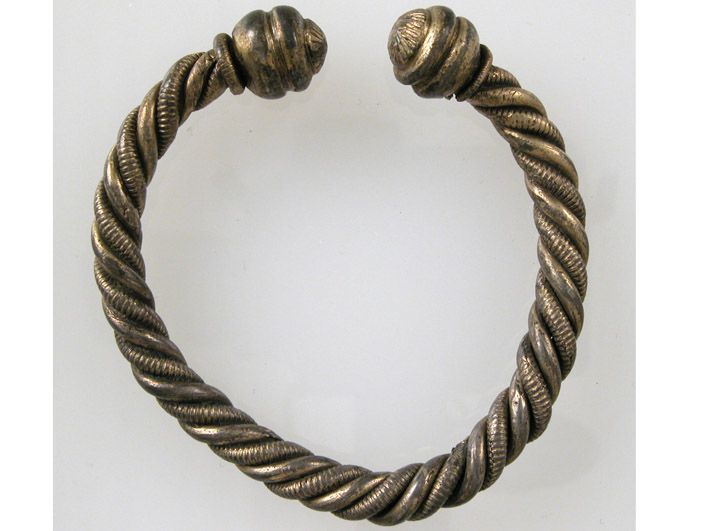 Image from Picryl under license CCO 1.0

Origin of the Bracelet

The etymology of the word ‘bracelet’ is traced to the Greek word ‘brachille’, meaning ‘of the arm’. They have been known to be created out of varying materials including: wood, bone, leather, cloth, plastic, metal, shells, and grasses. Bracelets are also sometimes decorated with further materials such as: gemstones, ceramics, pebbles, feathers, tortoiseshell, and more.

History of the Bracelet

It is rather difficult to pinpoint the exact moment in time when bracelets were first worn; however, it is safe to say that it was a long time ago. In fact, in 2008, archaeologists were excavating the Denisova Cave in Siberia and found an entire collection of antique jewellery, including a bracelet. It was made out of polished green stone by our prehistoric ancestors, the Denisovans. It is unclear whether it was believed to have any effect on the wearer, but it certainly makes it clear that bracelets have been sought after for many, many years.

Ancient Egyptians were also admirers of the bracelet. This is confirmed by the varying types of bracelets that have been found in the Egypt area from as early 5,000 BCE. The Egyptian bracelets were primarily made out of copper and gold, sometimes they incorporated stones and gems. The nobility would have enjoyed bracelets adorned with elaborate gemstones, whereas the average Egyptian would only have been able to afford a simple copper bracelet. Although some of the bracelets worn by the Egyptians were purely for decorative reasons, it is said that the bracelet was also worn to serve spiritual and religious purposes. The scarab bracelet is a traditionally Egyptian piece, which represents regeneration and rebirth. They were often wrapped into the bandages of mummies, in order to help them in the afterlife. 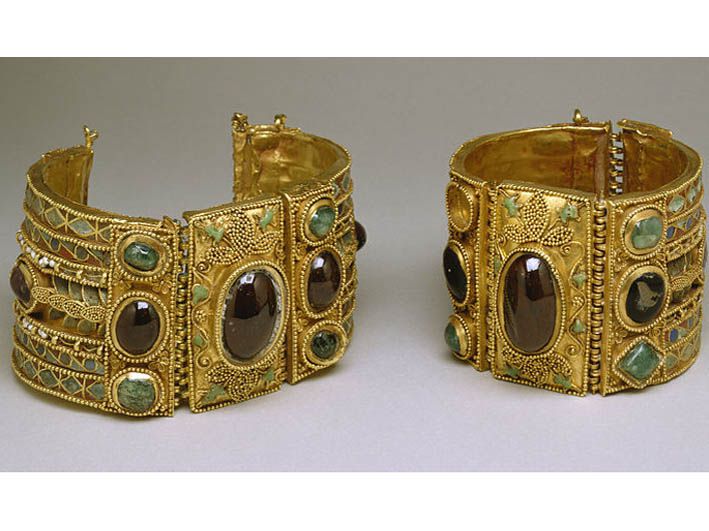 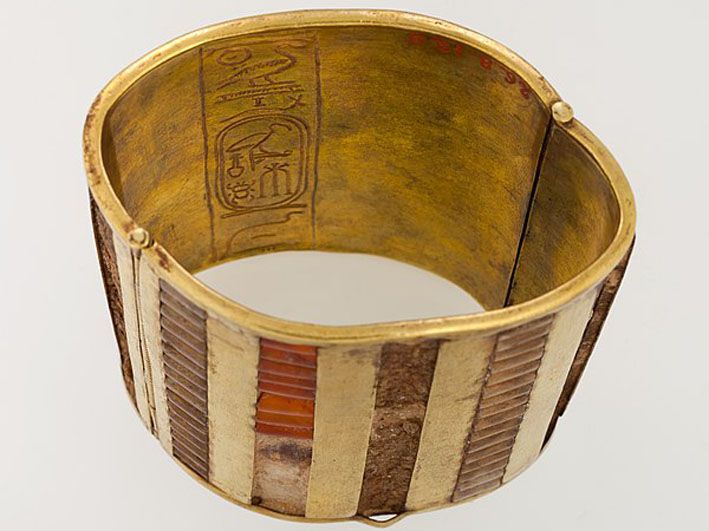 Image from Picryl under license CCO 1.0

The Greeks, the Romans and the Celts

Greek soldiers often donned metal and leather cuffs on their wrists and arms for protection during battle. This was later embraced by the Romans and the Celts as well. Occasionally, the bracelet was also worn to signify that a particular warrior had shown great bravery in battle. Eventually, more and more people chose to wear the bracelet for decorative reasons, rather than for protection in war. It remained a popular accessory until the Middle Ages, perhaps because Christian beliefs chastised those that had a ‘unhealthy’ regard for personal vanity. After the brief decline, it surged back into popularity in the 17th Century during the Renaissance period. 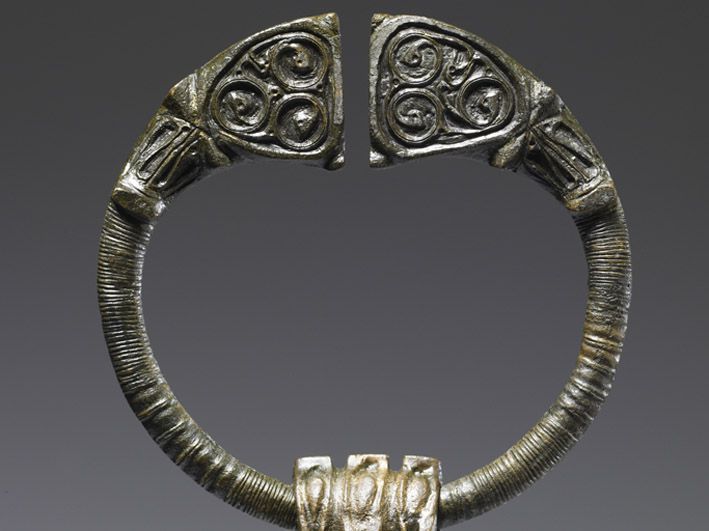 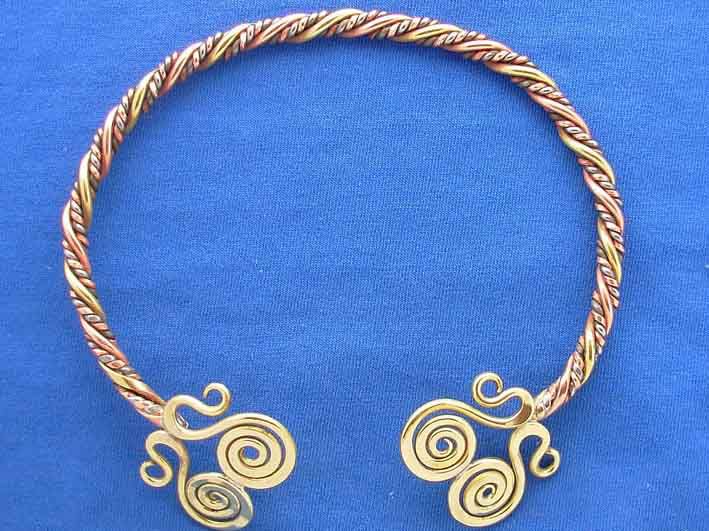 image by Hans on Pixabay under Pixabay license

From around 2000 BC, Asian cultures have been crafting jade bracelets. It is said to symbolise wisdom, virtue and courage. Subsequently, in China the jade bracelet is more than just a decorative piece. Often, jade and jadeite jewellery – including the bracelet – would be gifted to children in order to promote virtue, and also to protect them from harm. Further beliefs about the properties of jade include its healing properties for the kidneys and stomach; and that it helps people communicate with spirits that wander the earth.

Gold bangles were the prevalent bracelet style that could be found in India. Today, bright glass, wooden beads, and colourful metals have become popular components of the bracelet in India. 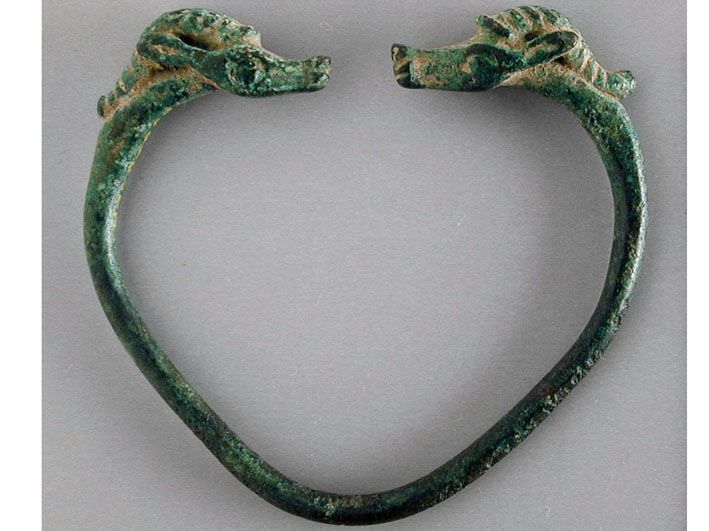 During the 20th Century, bracelets overall became more affordable due to mass manufacturing techniques. By the 1920s, the elaborate, ornate designs of the Victorian period gave way to the structured lines of the Art Deco period, and then in turn to the curved, flowing lines of the Art Nouveau period. More plastics were added to jewellery in the 1930s, making bracelets more accessible for children and teenagers. Charm bracelets became extremely popular in the 1950s. Then, by the 1970s, there was more demand for variation. All kinds of styles were worn such as thin chains, statement cuffs, and delicate bangles.

Many bracelet designs, styles, and trends have continued into the 21st Century, such as the introduction of silver as the most common material for bracelets. The preference for silver as an alternative to gold or platinum is successful in large part due to it being comparatively inexpensive. As more and more people are becoming involved in the eco-friendly movement, there has been more demand for bracelets that are eco-conscious, for example vintage or antique bracelets. A lot of people today wear bracelets that might have some meaning behind them, such as a social cause or something to signify friendship or commitment. All of which can often be crafted out of inexpensive materials. Although, of course, archetypal ornate gold bracelets enhanced with gemstones are still very popular today.

This style of bracelet has identical uniformed wide and thick links. It is claimed that the name of the Belcher bracelet was inspired by Jem Belcher, a boxer who from 1800-1805 was Champion of All England.

A cuff bracelet is similar to a bangle in that it is also rigid. That is where the similarities end. Unlike the bangle (a closed circle), a cuff bracelet is ‘open’, meaning that there is a gap in the bracelet.

Bangles vary from bracelets in that they are rigid, instead of free-flowing. A bangle also doesn’t have a fastening or clasp. In this way, it is worn by placing your hand through it so that the bangle rests on your wrist. 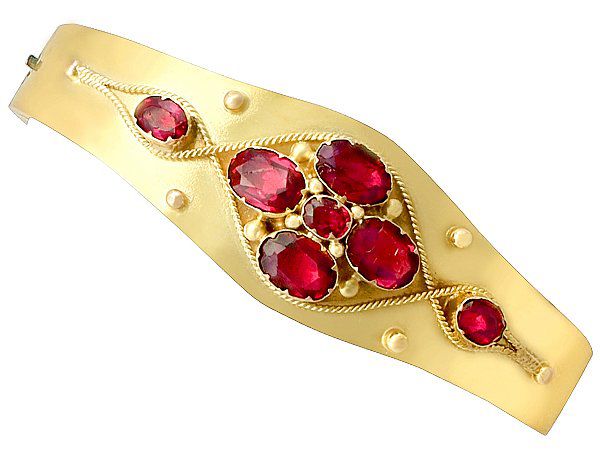 A curb bracelet has uniformed oval links that have been crafted in such a way that they lie flat when placed on a surface. On occasion, they may be referred to as ‘gourmette chains’.

A charm bracelet is a chain bracelet which carries ornaments, ‘charms’, that usually hold some personal significance. Originally, a charm was used to pass on luck to the wearer; however, in more recent years, a charm might be added to the bracelet to mark a special occasion or event. 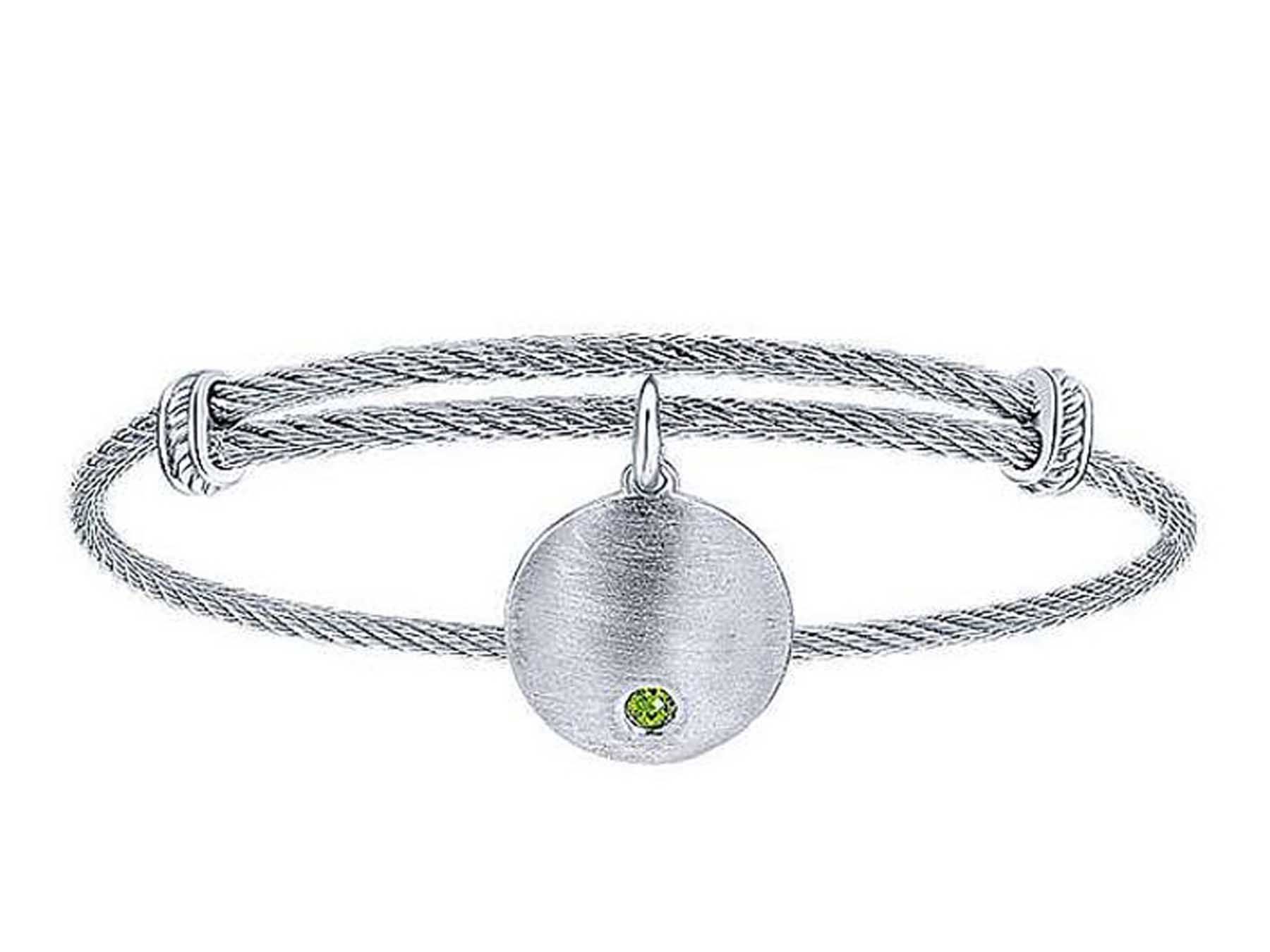 Image from Diamond and Design under the Public Domain Certification

Although perhaps not a style of bracelet, the mystery setting certainly does have impact on the design of a bracelet. It was introduced in 1933 by Van Cleef & Arpels. It was a new kind of setting that eradicated any visible prongs, or claws, that held gemstones in place. Initially, it meant that the bracelet was quite rigid. However, in 1938, a new way of setting the stones meant that the bracelet could be more flexible.

The gate bracelet consists of a chain of interlocked barred panels that look much like gates and fences in the English countryside. The chain style is very similar to the belcher link chain. Learn more about the chain and history of a gate bracelet here. The rope chain is a design that is much like a rope. It is a very delicate bracelet which is comprised of several strands that are weaved around together in a spiral design that resembles a rope.

The tennis bracelet is usually quite a light, flexible band, usually crafted in gold or platinum that is heavily ornamented with diamonds or gemstones. 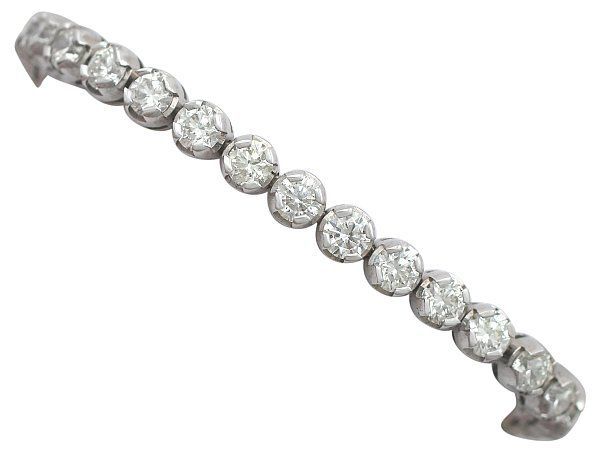 Although the wristwatch might not be considered to typically be a bracelet, they possibly should be. Many types of wristwatch are not simply used to tell the time, but also to make a decorative statement. Our collection of watches explain the point perfectly. It is easy to see then how the bracelet has maintained its popularity, from prehistoric times to the present. It is an item that should be applauded for its variety and ability to move with the trends and the times. 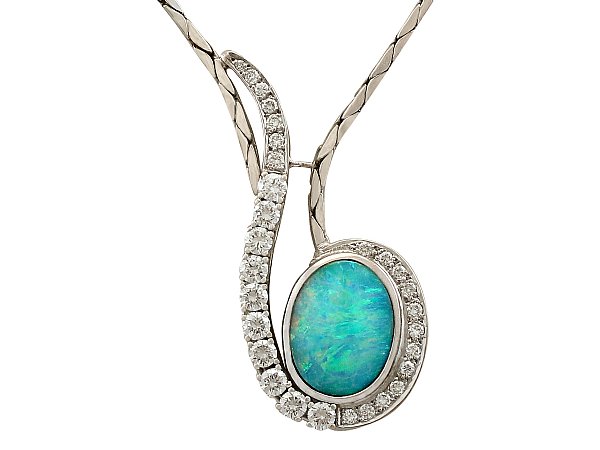