What is the pearl anniversary? If you’ve been married to your other half for a long time, the specific anniversaries can begin to blur together. Today, we’re putting all of our focus on that special 30-year anniversary; read on to learn about how the tradition came about as well as our recommendations for the best gifts.

The Traditional Gift for 30th Anniversary

In fact, it was only in the 20th century that the first fifteen years consecutively had specialty gifts added, with every five years after that becoming a significant date also. This is likely the aftermath of the massively increased consumerism that was a result of the industrial revolution and the emerging middle class that happened through the 19th century and early 20th century.

Although the ‘traditional’ nature of these gifts doesn’t hold much weight beyond a capitalist demand for profit and production, there is at least sentimental meaning behind each year’s gift. For the pearl anniversary, the symbolism is tied to the time it takes for pearls to form. Whether a pearl is naturally-occurring or cultured, it takes months or even years to form to the point where it can be harvested. This symbolises the endurance and strength of the love shared between the couple in the marriage. As well as being a sign of eternal love, pearls represent clarity and wisdom, two traits that are essential for a marriage to have true longevity.

If you are approaching your 30th wedding anniversary and you’re looking for some pearl anniversary gifts, please read on as we explore some of our favourite suggestions. Pearl gifts for your 30th anniversary are more diverse than you might expect.

When you’re looking for the perfect pearl anniversary gift, look no further than our extensive pearl jewellery collection. We have pearl jewellery from as early as the 1820s through the antique and vintage years through to contemporary pieces, meaning that all tastes and styles will be satisfied. Below, we’ve taken some of our favourite pieces from a range of jewellery categories to give you some inspiration for that very special celebration.

This is a 1920s pearl, diamond, and platinum sautoir necklace, and it’s a perfect pearl gift for your anniversary. The sautoir necklace style became popular during the Roaring ‘20s, when young flappers popularised dropped-hem dresses and tightly cropped bobbed hair. The sautoir is designed to hang very low, often past the navel, complimenting an elegant dress or a sophisticated jumper equally well. 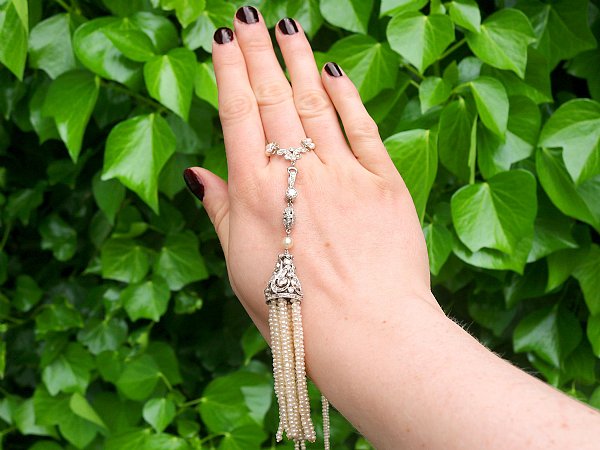 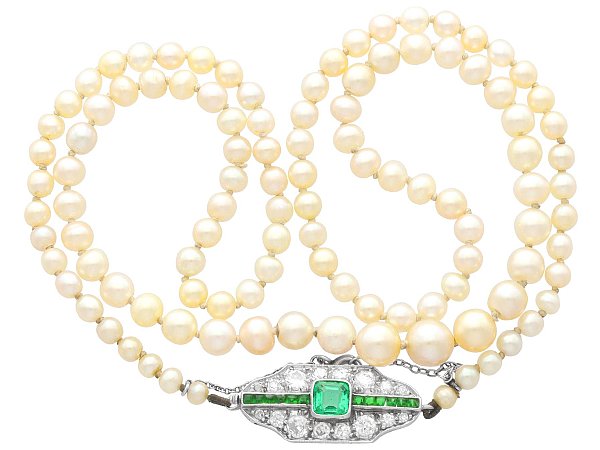 When you mention a pearl necklace, most people will think of strand necklaces.

The single strand is the most simplistic version, while you can get a great many more strands on a single necklace also.

Sixteen diamonds, a feature emerald, and no fewer than twelve peridots decorate the clasp of this strand.

Our final example plucked from the masses of beauties is this very appropriate love-heart-shaped pendant.

Coated in seed pearls across the pendant itself as well as interspersed throughout the links of the chain, this romantic piece of jewellery is the perfect anniversary gift for any year.

If your 30th wedding anniversary is on the horizon, this a brilliant pearly present. 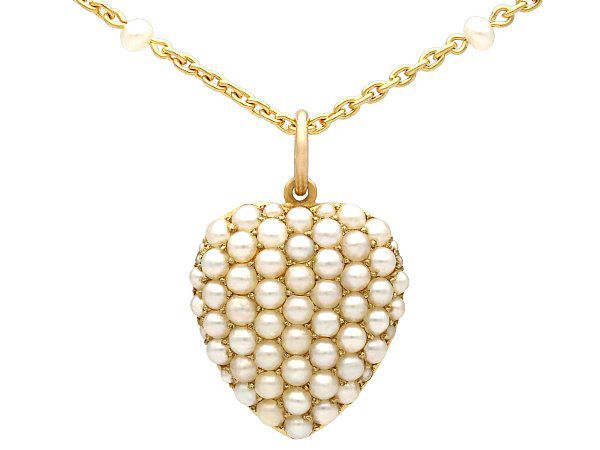 Among our varied range of earrings, we have pearl examples from every era. Whether you like studs, drop earrings, or even clip-on earrings, we are proud to present every style; we know you’ll find something you like. Let’s check out some of our pearl earrings. 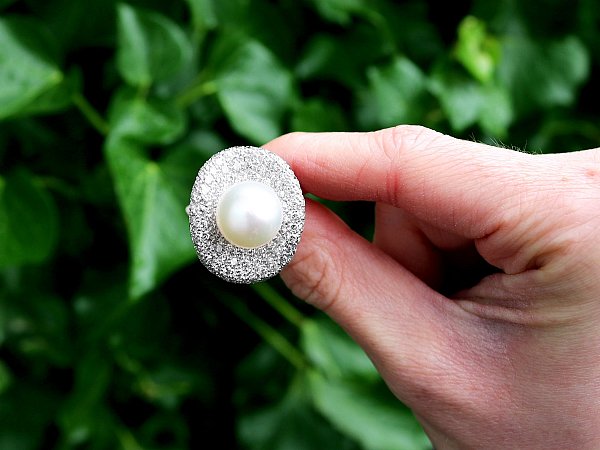 The sparkle on these large studs is stunning, while the lustre of the pearls is luscious and rich.

Anyone celebrating their 30th wedding anniversary would love to receive these larger-than-life stud earrings as an anniversary gift.

For an example of some drop earrings that would be good 30th wedding anniversary gifts, these platinum earrings are perfect.

The drops are accented with cultured pearls, which are pearls that have been crafted through light human intervention; the pearl farmers place a natural nucleus within living oysters and leave them to produce beautiful pearls like these. 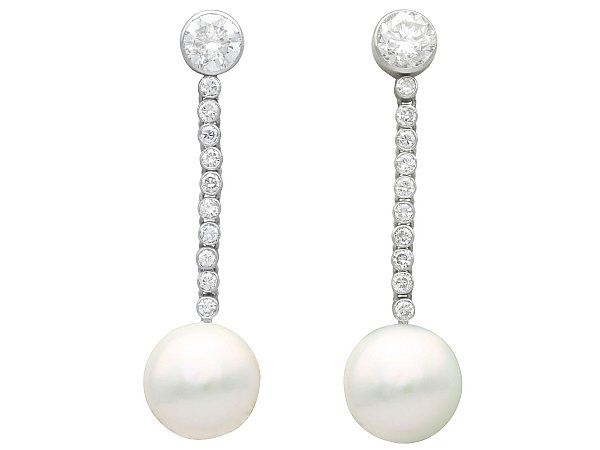 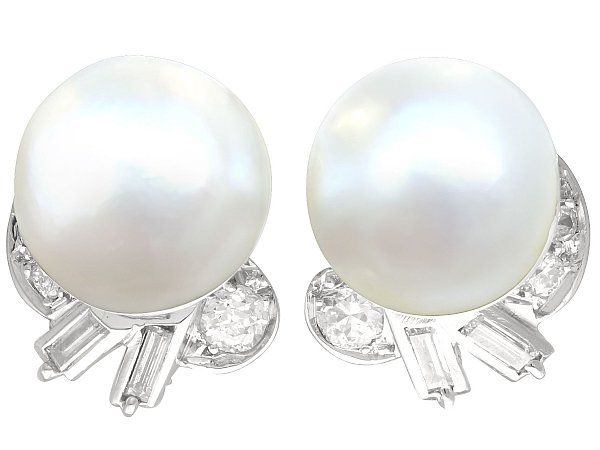 Finally, a stunning pair of 1930s clip-on pearl earrings made with cultured pearls and diamonds.

The use of angular cut diamonds along one side of these earrings is very typical of the period, reminiscent of Art Deco jewellery styles that were hugely popular in the first half of the 20th century.

The platinum clip-on earrings are suitable for everyday wear just as well as they would suit being worn for every important celebration of the year.

Brooches are a great pearl anniversary gift for men or women, being versatile pieces of jewellery that suit masculine and feminine fashion styles equally well. Whether you’re interested in something understated or something ludicrously luxurious, our brooch category is the place to start your journey.

This antique 1930s brooch is a stunning feature piece, with a stunning 1.29ct feature diamond alongside an array of pearls graduating in size.

The symmetrical design with architectural shapes is highly indicative of the Art Deco period and the most popular elements of jewellery design from this time.

This large pearl brooch is a statement befitting your 30th wedding anniversary. 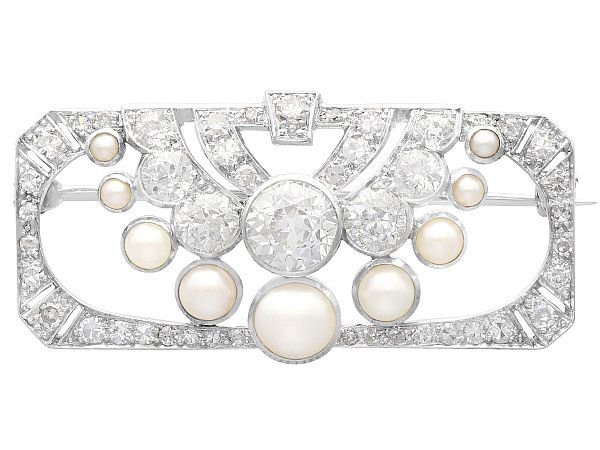 We have something very different to show off with this beautiful vintage brooch.

A stunningly large South Sea pearl sits at the focal point of a large brooch accented with one-hundred-and-seventy-eight pink tourmalines in a range of cuts.

The colour in this brooch is rare to find in a pearl anniversary gift, making this a unique option for someone that loves to stand out.

Our last brooch example is also exceptionally unique, featuring a Mississippi river pearl which has a stunning naturally-formed shape.

The creator of this piece of jewellery knew what they were doing, utilising the setting style to create the illusion of a pure white feather.

This is a great gift for a man or a woman, so bear it in mind when you’re preparing for your own 30th anniversary gift-giving. Pearl rings are a special gift, whether they are engagement rings, birthday gifts, or – in this case – your 30th wedding anniversary. They are sophisticated stones to use for rings, no matter the shape, size, or style. All three of the examples we’ve chosen today would be perfect pearl anniversary gifts. 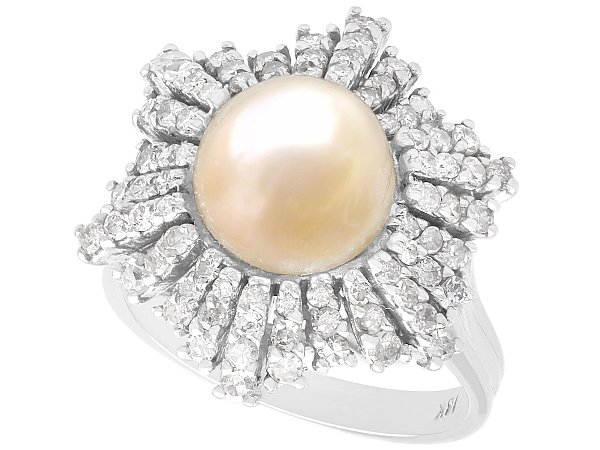 One thing that sets this pearl ring apart from others is the colouration of the natural saltwater pearl.

This type of unique unpredictability can only truly be achieved by using naturally-occurring pearls.

The undulating border of diamonds is the icing on the cake for this ring that managed to balance the bodacious size of a cocktail ring with the demure sophistication you might expect from pearl jewellery.

This stunning piece of jewellery is one of our more modern items (being only thirty or so years old).

The delicate swirling shape of the setting creates the illusion of movement, with the central pearl being oriented by a total of fourteen diamonds in a white gold setting.

The setting style used for the diamonds keeps one prong facing outwards, almost hinting at a flower or star shape for this ring.

Needless to say, it’s a deeply romantic piece of jewellery that anyone would love. 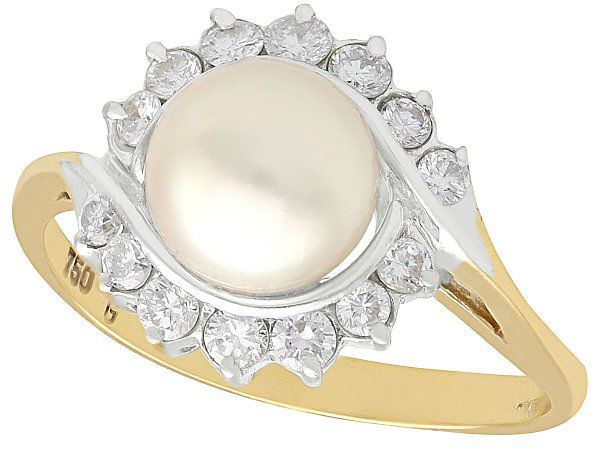 The twist deign is often referred to as a ‘toi et moi’ ring, the French for ‘you and me’.

What could be more romantic than a ring intended to signify the loving union shared between two souls?

And if that doesn’t seal the deal, the stunning addition of fifty-two diamonds accenting the shoulders of the ring sure will!

Maybe one single piece of jewellery simply isn’t enough to express your love for your spouse. It is your 30th wedding anniversary, after all, hardly the time for reasonable restraint. Our pearl jewellery sets are varied and beautiful, check them out.

This antique jewellery set features natural saltwater pearls which have been impressively matched in colour, size, and shape to make a beautiful trio of pieces.

The unique shape of the design used across both the earrings and the ring is indicative of the advanced age of this jewellery set – dating to the 1870s!

Something unusual and beautiful which lets your spouse know exactly how much you care on such an important date. 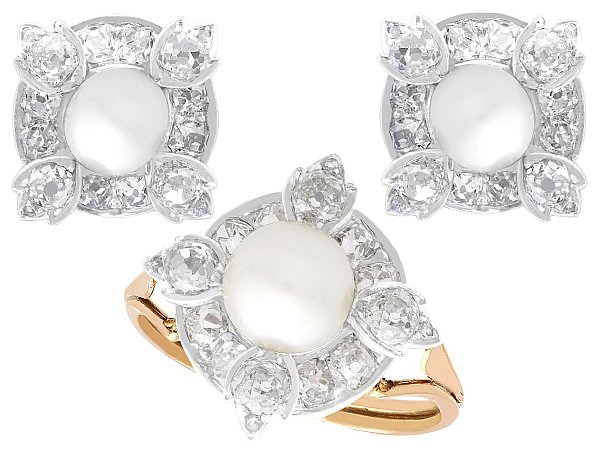 Something more modern can be found in this 1950s set of pearl studs and a matching necklace.

The pearls have a stunning lustre befitting their clear white colouring, while the diamond borders to each piece create a luscious sparkle that you simply can’t ignore.

This white gold jewellery set is the type of gift that comes once in a lifetime, with plenty of beauty to be worn time and time again for all those special occasions.

This suite of jewellery is truly and genuinely a unique set to behold.

Crafted by the master craftsmen at Asprey & Co Ltd, the suite makes use of clustered natural pearls of all shapes, sizes, and colours to create a set consisting of earrings, a brooch, and a ring.

This is the full package for anyone who likes their jewellery to really stand out among the crowds; if your spouse can appreciate the work that goes into jewellery like this, they’ll love this suite for their pearl anniversary. It’s been a long journey going through a taster session of all the different kinds of pearl jewellery that we offer, and we hope you’ve enjoyed yourself whilst also getting inspired. If your own 30th wedding anniversary is approaching, maybe something in this blog spoke to you; if you’re still unsure, please explore our selections in more depth – we really do have something for everyone. 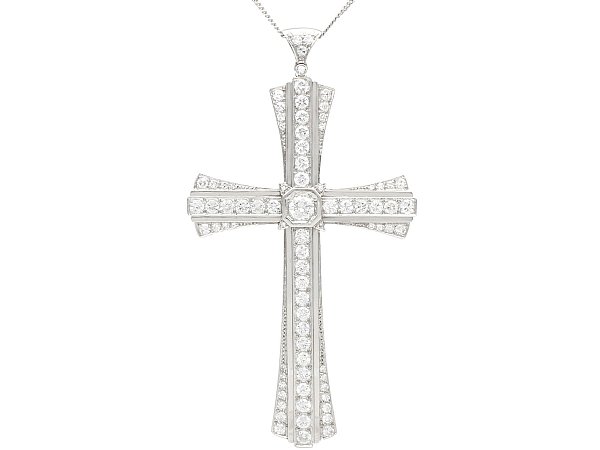 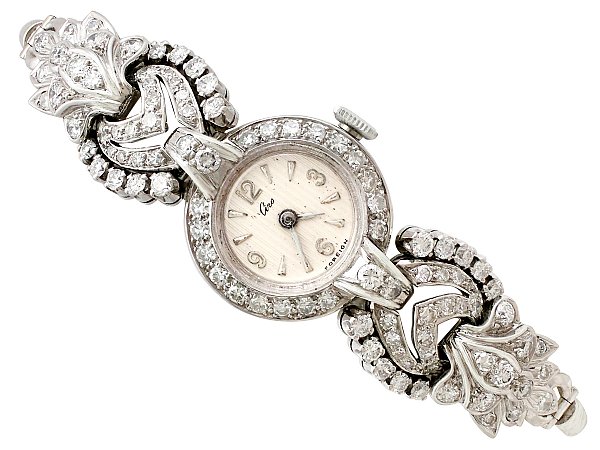