What is a Target Ring?

Target rings are gemstone rings featuring concentric circles of stones in different colours. Getting their start in the Edwardian era – an excellent time for advancements in jewellery – target rings were used as romantic gifts, mementos of one’s love.

Initially, target rings were made exclusively with diamonds and rubies. Given the strong links between rubies and passion, it makes sense that this was the first iteration of the target ring. After this design took off in popularity, more and more variations were created. Sapphires were another prominent stone being used, having a strong link to both wisdom and protection.

Today, target rings are less common finds, although they were made for much of the first half of the 20th century.

Naturally, target rings were used as engagement rings by the hip and trendy of the early-20th century. They are intrinsically romantic in nature, and so make for excellent engagement rings. If you’re looking for something a bit different for your own engagement ring, consider the target ring for yourself.

They balance the traditional elegance of a diamond solitaire ring with the overt glamour of a cluster ring. These rings are unique to their time, since the technology required to hold so many gemstones securely in place only came about around the turn of the 20th century.

Engagement rings have evolved a lot over time, with certain styles coming and going in popularity. The target ring never took centre stage in the same way that the solitaire ring or trilogy ring did, but you never know what the future may hold for this unique and interesting piece of jewellery.

An example of the more typical target rings can be found in this vintage ring. This example, from the 1990s, shows a fairly true representation of the target ring. It has the selection of diamonds at the centre of the ring, surrounded by a ring of emeralds, and then another ring of diamonds. This concentric design is very typical of the target ring aesthetic, giving it a true ‘target’ appearance.

Something a little different can be found in this antique 1930s amethyst ring. Rather than many smaller gemstones, it has one large amethyst, surrounded by a ring of diamonds. This still adheres to the target ring design, since there are circles of colour in the ring, but it is something more unique than the typical target ring. This cocktail-sized ring is something of a crossover between the target ring and the halo ring design that would later become popular.

At AC Silver, we are lucky enough to have the 1940s dress ring that takes a twist on the most classic target ring design. A focal diamond is surrounded by a ring of calibre-cut rubies, which in turn are crossed and accented by more diamonds. Crafted in platinum, this Art Deco ring is archetypal of its period. This would be an excellent engagement ring for anyone interested in bringing equal amounts of sparkle and uniqueness to their engagement. The Art Deco touch that can be seen in this somewhat architectural jewellery piece gives it a sense of timelessness that’s hard to beat.

Every now and then, we discover a new type of ring design from times past that just captures our hearts. When we learned about target rings and their history of romanticism, we couldn’t wait to check our stock and see if we had any to share with you. So, what do you think? Are you keen on target rings? 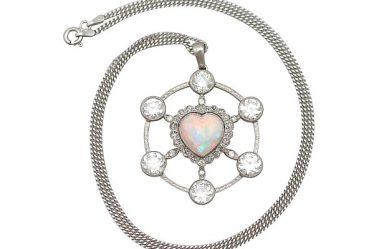